Seaver, the Kooz, and Dodger Blue(?!) 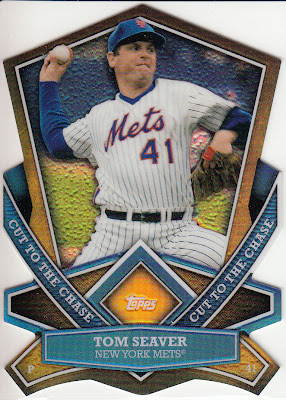 This was a must-purchase item at Sunday's show.  It was the most expensive single card I bought, yet it was still just one dollar.  It's a real beauty, but if I must be picky (and I must), the photo appears to be from Seaver's second go-round with the Amazins, while the blurb on the card's back highlights Tom's exploits of April of '76 -- the season prior to his trade to Cincy.  A minor detail I suppose, and I should probably get a life.  This is a sugary-sweet card and I will leave it at that. 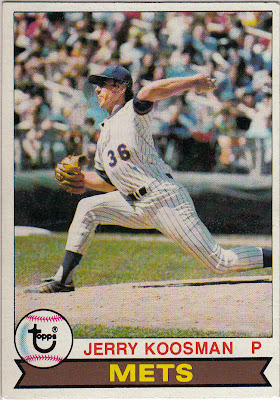 From '79 Topps, the other half of the Mets' dynamic pitching duo of that era.  This one set me back a cool 7 cents.  Seaver got all the attention -- and rightly so -- but Koosman was no slouch.  He won 220 games for this career, including 140 for New York.  It is interesting to note that Koosman went a dismal 3-15 for the Mets in the '78 season, which was his final campaign in Flushing.  The very next year, 1979, he went 20-13 for Minnesota. Go figure.

Next to the Mets, and despite the stupid interlocking L.A. patch on the sleeve, the Dodgers might have the most attractive uniforms in baseball.  I guess that's part of the reason why I always find myself coming home from shows with my fair share of Dodger Blue cardboard.

Each of the following was a dime-box find... 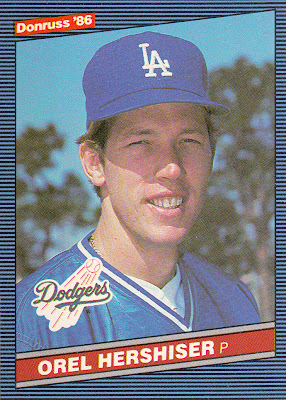 The only place the "L.A." belongs is on the cap, and Orel wears it well on this '86 Donruss piece.  I never cared much for Hershiser until he pitched a season in Queens.  Nowadays, I enjoy snagging any cards of his I can find.  Plus, he's a darn good T.V. analyst. 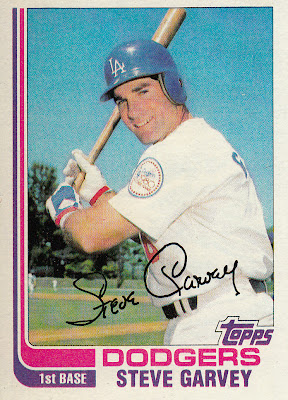 Not much to dislike about this one.  A beautiful blue sky in the background is only bested by Garvey's million-dollar smile.  I'm glad this year's Archives product utilizes the '82 Topps design, because it's allowing my appreciation for this set to grow each day. 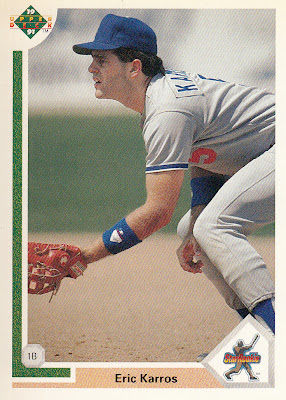 I have no idea how or why I started to collect Eric Karros cards.  But, I'm glad I do.  He's got countless cards from the early-to-mid '90s that I really dig.  This is one of Karros' earliest cards, as a few of the major companies didn't produce a card of the eventual N.L. ROY in 1991. 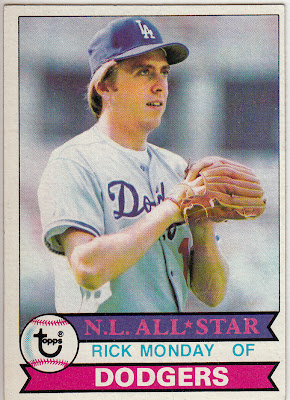 Ah, just in time for Independence Day!  Is there any greater act of patriotism in the annals of pro sports than Monday's heroic rescuing of the American flag in 1976?  Then a member of the Cubs, Monday swooped in from his outfield position and saved the Stars and Stripes from being burned by a pair of on-field protesters during an early season game at Dodger Stadium.  Talk about a goosebumps moment. And, yes, it helps if the Dodger in question was once a superstar for my beloved Mets.  This is by far one of Straw's coolest cards.  And it's the Topps Gold version, to boot.  One of the best pickups from this latest card show, for sure.

I hope this little detour into Hollywood's baseball scene doesn't put me in hot water within the community of Mets fans.  After all, it's just cardboard, right?  No plans here to get a Tommy Lasorda tattoo on my fanny any time soon.

Blue is a great color, and I can admit that the Dodgers wear it pretty well.  But, it'll never have the same appeal and beauty of the blue and orange of the Metropolitans.