Have You Met...? Napoleon Dynamite Edition 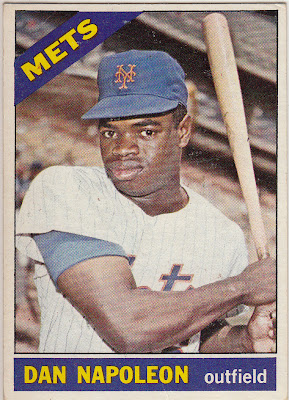 I was ecstatic to find this 1966 Dan Napoleon card at my local card shop last week.  Next to the still-elusive cards of Clarence "Choo Choo" Coleman and Pumpsie Green, this is one of those cards I had to get my mitts on ASAP.  A sterling addition to the All-Time Mets Project (to be referred to as ATMP henceforth).

Never mind the name -- which is tremendous, of course -- but look at that face.  That face means business.

Alas, the face didn't exactly match up with the career achievements in the case of Mr. Napoleon, who was a Met in 1965 and '66.  A paltry 80 games played (primarily in the outfield) and a grand sum of zero home runs. Life is kinda tragic that way, I guess.  Nonetheless, Napoleon's baseball existence is undeniably woven into the colorful tapestry that is the history of the New York Mets, and that's good enough for me!

Like Napoleon, Johnny Lewis was also a short-lived outfielder for the Amazins during the mid-60s. 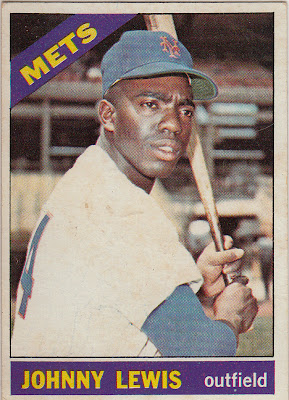 You want a sad early-years Mets stat?  Fine, here it is: Lewis's four stolen bases in 1965 were tied for the team lead.  Ouch, babe!

Like his outfield counterpart with the serious mug, Lewis will lovingly take his place in the Metropolitan Baseball Club's baseball card lineage.