I've had a curious amount of success hunting through the resident discount boxes at my local card shop.  At 50-cents per card, though, many of the finds in these boxes are basically overpriced in my opinion.  For instance, I can't see spending half a buck on a 2013 Heritage base card of Mike Baxter, but that's just me.

But, every so often, you can find a real diamond in the rough in these boxes which, to be fair, are also profusely stocked with inserts and parallels-a-plenty from the various Topps products of the day.  You've just gotta have the time and patience to dig through 'em all and find what excites ya.  Luckily, I'm in no short supply of either time or patience when it comes to baseball cards.

Now, normally "Easter egg" is lingo from the world of visual media used to categorize hidden images or messages placed in the given medium by the producers/programmers as means to have a little fun.  But I also think it's a fitting phrase to describe some of the cards I've been lucky enough to stumble across in my discount box hunting sessions.

For instance, behold the granddaddy of all Easter eggs I stumbled across in my most recent visit: 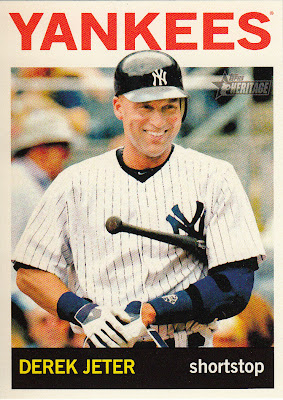 This is one of the 25 hobby-only image variations featured in this year's Heritage product.  And, honestly, this one is something of a misnomer, as there ain't much in the way of 'activity' happening.  But, I guess everything is relative, as Jeter's regular base card is a portrait of the shortstop holding the bat over his right shoulder.

Anyhow, any of the funky Heritage variation cards -- color, action or Venezuelan -- are usually pretty tough pulls. Out of the hobby box I bought earlier this year, I netted just one -- a color variation that has since made its way to the land of the Night Owl.  Thus, I was pretty excited to find this one of a future surefire HOFer.  And, for 50 cents, how can you beat that?!

Other Easter eggs were also to be found.  Perhaps not of the same magnitude, but still just as exciting for your's truly, were three SPs from the '13 Heritage collection. 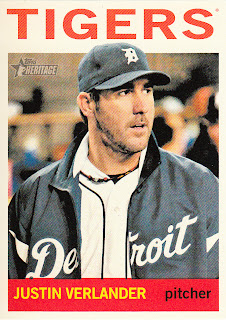 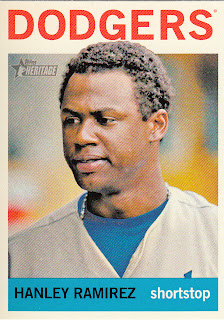 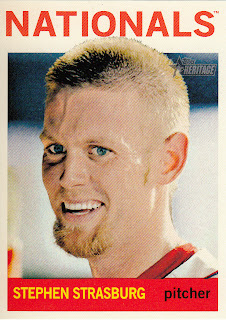 If you're a Heritage set collector, you know how much of a pain it is trying to hunt down all of these goshdarn things.  So for two quarters apiece, I was thrilled to acquire three more pieces of my SP puzzle.

Well, it's quite obvious the shop owner recently tore into a couple of hobby boxes of Heritage and everything but the relics, chromes and autos went into the discount bins.  From what I've observed in the store, the guy isn't really impressed with anything that isn't vintage or doesn't contain an autograph or a relic swatch.  So I guess I'm not completely surprised that any of these SPs found their way into the common mix.  I don't believe he has the patience with all these new-fangled sets to know what's a short print or a variation.  And, hey, for my sake, I don't have any problem with that!

A few more Heritage goodies that I gobbled up: 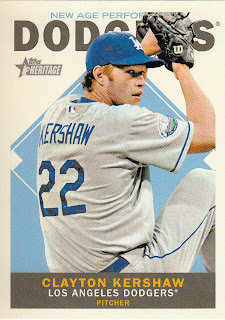 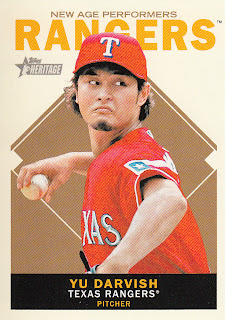 I've really enjoyed the New Age Performers inserts in years past, and I really, really like 'em this year.  There were a bunch to choose from, but these two were most pleasing to the eye.  I finally have enough of these NAPs to complete a full binder page.

And, every so often, you'll come across a retail Easter egg in the hobby shop. 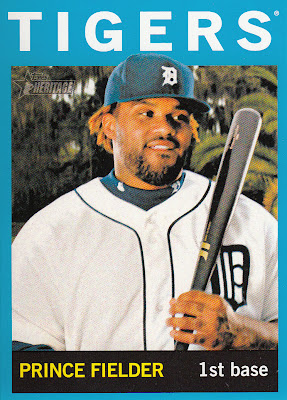 Brilliant!  You know I'm a fiend for the colorful Heritage parallels.  Looks like someone did a little retail rippin' at Wal-Mart recently, eh?

This next 'egg' isn't from Heritage; rather it hails from 2011 Topps. 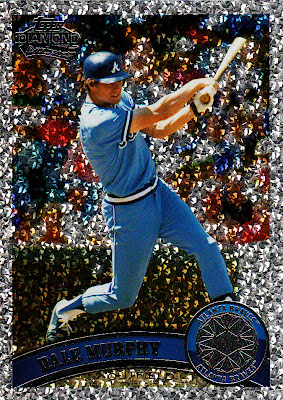 Of all the neat little surprises I've come across in these boxes over the past year or so, the majority of them have come in the form of the 2011 Topps 'retired' SP variations, either diamond or cognac.  Like many of you reading this, I'm also a sucker for sparkly or shiny cards.  Especially when they have all-star caliber sluggers like Murphy on them.

Last, but not least, the most colorful egg of the bunch... 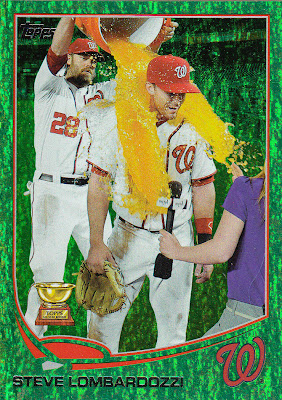 These 2013 Topps emerald parallels certainly aren't rare, but getting an emerald version of a favorite player or just a card you really like isn't always easy.  So when I saw this one, I instantly new that it was a must!

I haven't ripped into any Series 2 yet (a hobby box is on the way!), and I've been trying to shield myself from seeing as many of the cards as possible. That being said, I think Lombardozzi's card is going to be in my top five from S2.  How is it that Topps didn't save this photo for an SP or something?  Certainly one of the most unique Rookie Cup cards ever!

So there you have it; a little Easter fun during the summertime.  I'm not sure how any future hunts are gonna top this one.  Though, I think I've said that before...