Two Young Guns and an Irishman 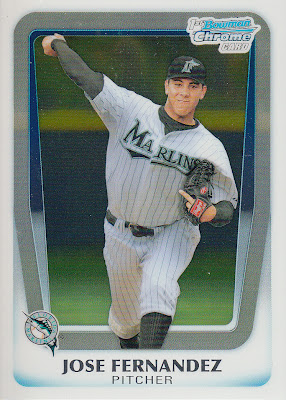 A yellow mailer addressed to Mrs. K arrived in Monday's mail, replete with a return address of Such & Such Sports Cards, Inc. (or something of that ilk).  I wasn't too suspicious, since my lovely wife -- the Redskins fan she is -- has been known to buy an RG3 or Clinton Portis card from time to time.

Alas, much to my delight, it was a little surprise for moi.  Of course, any surprise that involves baseball cards is always a wonderful surprise.  It seems my better half has been quality-checking the blog over the past month and noticed that I had struck out with my Jose Fernandez search at the last Concord Mall show I attended.  So, she went online and found for me a nice, shiny Bowman Chrome rookie of the Marlins' future ace.  Finally, my first card of this special young pitcher!

But, that wasn't the only one, as Mrs. K fished up another card of the newly minted All-Star for good measure. 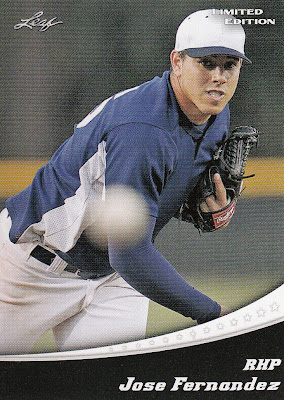 Like the Bowman Chrome, this Leaf Limited is also from 2011.  Looks like this photo was snapped when Fernandez was pitching for his high school team.  It's an awesome perspective, shot from behind home plate. And a great job capturing the ball in mid flight.

Fernandez wasn't the only young flame-thrower included in this surprise package.  How about a little home cookin'... 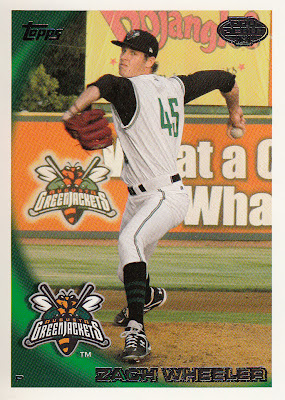 From 2010 Topps Debut, when Zach Wheeler -- now a New York Met -- was still property of the San Francisco Giants and pitching in the South Atlantic League.  This is the earliest Wheeler card I own, and a it's a pretty darn good one.

Last but not least, a player who doesn't fit the pitching motif whatsoever, but we love him in this house just the same. 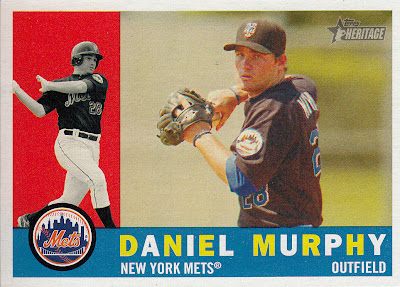 Daniel Murphy is a guy you can't help but root for if you're a Mets fan.  It's a tired saying, but he plays the game the right way.  He's got a little of that Pete Rose fire inside.  And it helps that he can hit a little bit, too.  This is Murph's Heritage rookie from 2009.  I love this year of Heritage and only wish I had been actively collecting it back then.

Great selections by Mrs. Kaz.  What can I say, her taste in trading cards is matched only by her taste in men.