Have You Met...? Wes Westrum 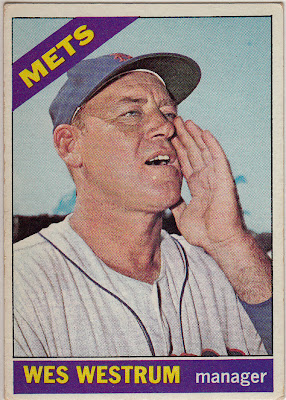 Sometimes 'manager' cards are a real drag, especially when you have to waste time and resources in acquiring them as part of a proper set or a team project.  After all, these guys don't throw a pitch or drive in a run.  Not to mention the drab photos that normally populate these cards.

But, none of that applies here.  Wes Westrum, the man who succeeded the immortal Casey Stengel as skipper of the Mets, shows up in the 1966 Topps checklist with this amusing piece of cardboard.

Westrum, a career .217 hitter during his playing days for the New York Giants, didn't fare much better as a manager, at least in Flushing (142 wins in parts of three seasons).  One might be tempted to provide a caption for what Westrum might be hollering.  My best guess: Please, somebody, for the love of God, get a gosh-darn base hit!  (It works best when recited in an angry Chris Farley-esque voice.)

Well... feel free to add your own caption in the comments section.

Anyhow, this Westrum card fills a need in my ongoing All-Time Mets project.  It's one of two cards of Westrum in a Mets uniform that I'm aware of.  In my opinion, this one definitely has more personality than the card from the '67 set.