Charlie O'Brien: You Make the Call

Okay, I need some assistance from you.  Yes, you.

I always knew the former Brewer/Met/Blue Jay/Brav -- erm, too many other teams to name, so let's just say former big leaguer, okay? -- had a lot of neat-looking cards.  Never known for his plate prowess, O'Brien survived many a year in the Show by being an elite defensive catcher.  Thus, a number of his cards showcased Charlie in his catcher's gear, performing feats of competitive greatness.

But, I had no idea how many good ones ol' Charlie had til I started going through my COB cards in an effort to pick the one for my All-Time Mets binder.  Needless to say, it all became too much for me to process.

So, instead of agonizing over the decision, I figured I'd enlist the valued opinions of you good souls out there who might be reading this.

Thus, I submit to you the "Prime 9" Charlie O'Brien cards from my Mets collection.  Only one of the following will make the cut. 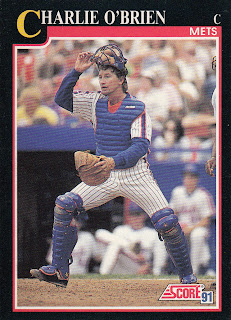 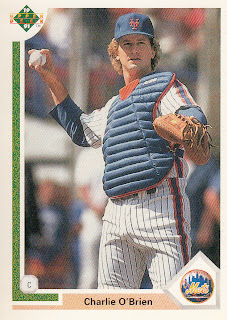 1991 Score -- I love the black-bordered cards from this set.  Here we see Charlie springing into action, ripping the mask off.  Tremendously cool action shot.

1991 Upper Deck -- Not as much of an action shot, but I'm a sucker for '91 UD.  Plus, we get a rare peak at Charlie wearing a normal ball cap, and not the backwards shell. 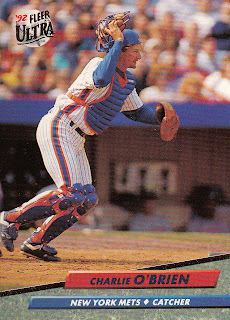 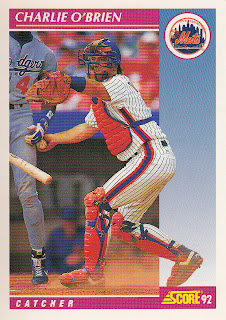 1992 Ultra -- Another sequence with COB disposing of the mask in order to do his thing.  But, this one is presented in full early-'90s HD gloss. 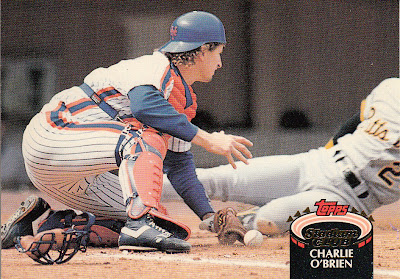 1992 Stadium Club -- I've seen this card bounced around the blogosphere in the past.  A pretty amazing action sequence, even though the Chuckster appears to be flubbing the play. 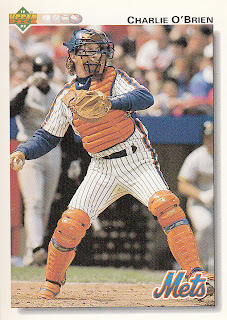 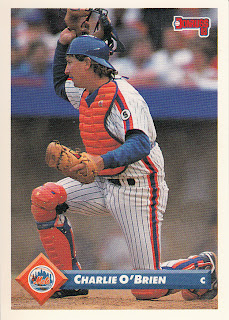 1992 Upper Deck -- The orange chest protector and shin guards in all their glory.  A classic pose.

1993 Donruss -- Many cards from '93 Donruss are going to find their way into the ATMP binder.  It's an incredibly beautiful set and, thanks to this project, my eyes have really been opened to that fact.  Could this be one of the many that makes the cut? 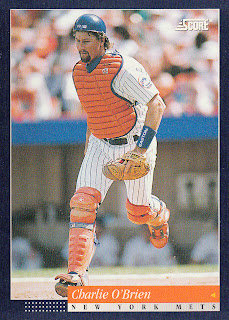 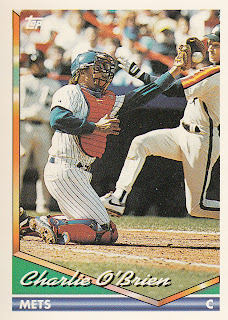 1994 Score -- The de-masked O'Brien jogging into action.  Kinda crazy that the Score brand is responsible for one-third of the cards in this poll.  But, they deserved the love.

So there you have it.  If you feel strongly about one of these fine candidates, do your old boy Kaz a favor and vote in the poll in the upper right-hand column.  And feel free to justify your decision in the commentary section. I'll need all the rationale I can get!

I'll keep the poll open through the weekend and I'll formally present the winner next week.

Charlie and I appreciate your assistance!