Have You Met...? Hunt, Hahn and Cleon 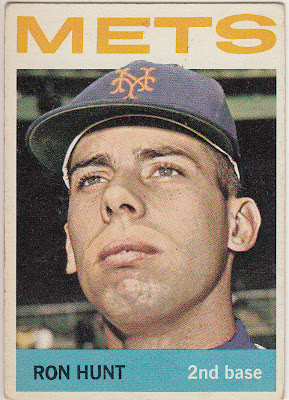 Man, has this been the longest All-Star break or what?  I don't like the idea of the entire league being off on post-ASG Thursday.  I may be wrong, but I think this has been the first  year when there hasn't at least been a game or two schedule for the Thursday after the ASG.  It's bad enough we have to endure a no-baseball Wednesday, but lumping another day onto that term is a punishment too far.  Anyhow, it'll be good to have the Great American Game return this evening.

So I finally decided to explore some of the vintage cards at my local hobby shop the other day.  I can't say for sure why I've ignored the numerous binders of '60s and '70s commons til now.  I guess I didn't have the itch that needed scratching as I do presently.  And that itch comes from my new All-Time Mets assignment.  I'm now on high alert to hunt down as many of those lost Mets as possible.

With a few bucks to burn, I flipped through the 1964, 1966 and 1975 Topps binders, hoping to find something pleasing.  Cards were either $1, half a buck, or a quarter depending on the binder, which was dictated by the conditions of the cards.  And, as it turns out, I had no problem finding some worthy pieces.

The lead-off card featured in today's post was a definite purchase -- a '64 Ron Hunt.  I already had a Hunt card for the project, but it's one of those latter-day Upper Deck flashback issues.  And a vintage card from a guy's playing days will always trump those sort of things.

Speaking of All-Star Games, don'tcha know Hunt was the first Mets player to ever crack the starting lineup in an ASG?  And, coincidentally, that was the 1964 affair hosted at the brand-spanking new Shea Stadium. Hunt, playing second base and batting in the 8-hole for the NL, went 1-for-3.  The Senior Circuit prevailed 7-4, thanks to Johnny Callison's memorable walk-off three-run homer. 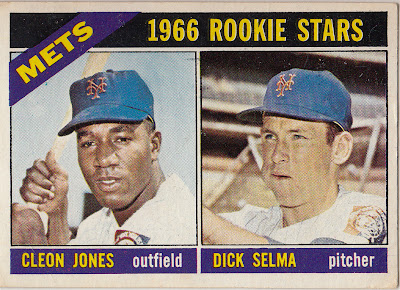 Leftfielder Cleon Jones played in an All-Star game, too -- the 1969 game, to be specific.  Jones wound up hitting .340 that '69 season (third-best in the loop) and finished seventh in MVP voting.  And if that weren't enough, Cleon and his Mets were World Champions in '69.  Not a bad year, I'd say!

I have a vintage Cleon card in my collection already, but couldn't pass up his 1966 rookie card.  Dick Selma, meanwhile, who shares the "Rookie Stars" spotlight with Jones, is a guy who I still need to track down in solo form.

This wasn't the only Cleon that came home with me, though.  For a quarter, I snagged this nice 1975 piece. 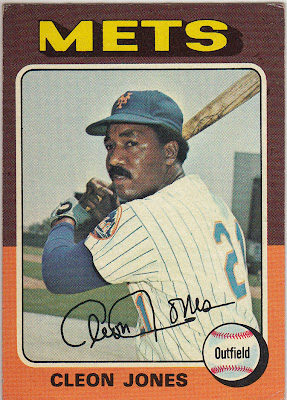 For a '75, I thought this was in pretty darn good shape.  It's tough to find many that aren't miserably miscut or diamond cut.

And from the same '75 set, a player who was previously absent from my Mets collection, outfielder Don Hahn. 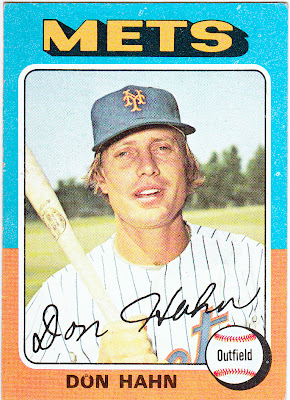 Hahn was a member of the scrappy "Ya Gotta Believe!" Mets in 1973 that lost a heart-wrenching seven-game World Series matchup to the mighty Oakland A's.  Hahn started all seven games of the Series, playing CF or RF, and contributed seven hits and a couple of RBIs.  And, as the back of this card points out, he set a World Series record for most ABs in an extra-inning game (7 ABs over 12 innings).  Not sure if that's been bested since then, but I would imagine it has.

I found a nice trio of '66s that I also purchased, but I'll save those for next time.

It's still early in the game, but I'm having a blast hunting down these vintage Mets cards!