Have You Met...? Mets Cards From Up North 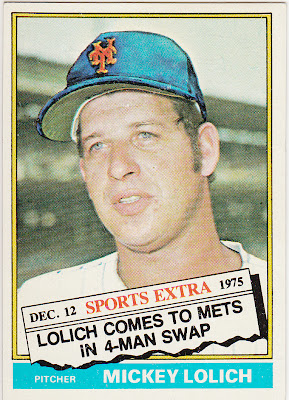 I know there are plenty of fine bloggers from our friendly neighbors to the north [Ed. Note: In case you didn't win the 8th grade geography bee like I did, that would be Canada.], but I've never had the opportunity to strike up a deal with any of them.

But all that changed a couple of weeks ago when Douglas from the blog Sportscards from the Dollar Store dropped me a line in regards to my then-newly minted All-Time Mets Project.  A fellow Mets fan (and a Jays fan, as well), Douglas was nice enough to offer up a pretty colorful list of Mets that I was still lacking from my collection.

Among the biggest hits was the above 1976 Topps Traded of Mickey Lolich.  To my knowledge, this is one of only two archival cards that exist with Lolich in Mets duds.  Albeit this one is airbrushed.  But, I can live with that since there aren't too many '76 Traded cards floating about.  That makes this card of the former Tigers All-Star a pretty special addition to the ATMP.

A pair of other old school Mets also found their way onto the roster of cards from Douglas. 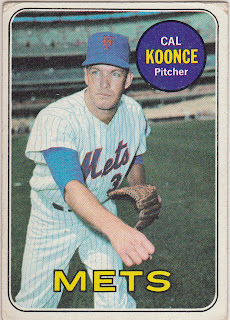 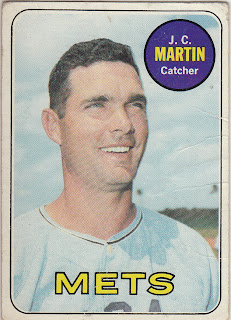 In four seasons as a Met, Cal Koonce crafted a 15-12 record primarily as a reliever.  He appeared in 40 games, going 6-3 with a 4.99 ERA for the Miracle Mets of '69.  Martin, meanwhile, was also a member of the '69 Mets, where he was the primary backup to regular catcher Jerry Grote. 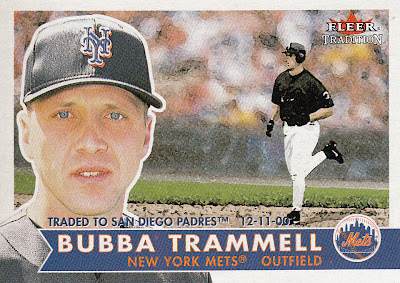 Hey, I said great names, not necessarily great players.  The Mets got Bubba along with reliever Rick White from the Devil Rays at the 2000 deadline in exchange for Jason Tyner and former Generation K member Paul Wilson. Bubba was a key pinch hitter and role player down the stretch for the eventual NL champs in 2000, and even contributed three RBIs in the Fall Classic that year. 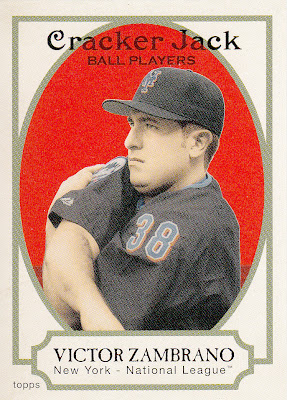 Zambrano was Tampa Bay's all-time leader in wins and strikeouts when the Mets acquired him in a most controversial trade at the 2004 deadline.  New York saw fit to part with mega pitching prospect Scott Kazmir in order to get Zambrano, who was 9-7 with a 4.43 ERA at the time of the deal.  Rick Peterson, the Mets pitching coach at the time, really pushed for this trade, bragging that he could tutor Zambrano into a front-line starter, while pronouncing the diminutive Kazmir essentially unfit for the majors.  Well... Zambrano went 10-14 in 39 games as a Met, while the 'iffy' Kazmir won 45 games and appeared in two All-Star Games in his first four years as a Ray.  If you look hard enough, you can still find a few Mets fans who bitch about this trade. 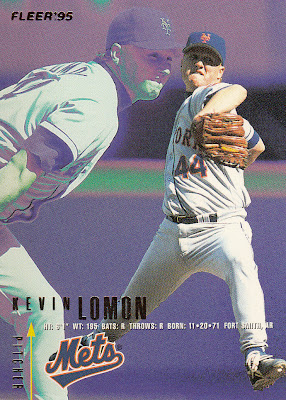 I've gotta be honest.  I've never heard of Kevin Lomon.  I had no idea someone with such a name played a game for the Mets.  And I certainly wasn't aware that a card of his appeared in the '95 Fleer Update set.  All the more reason to celebrate this addition to the Project!  Kevin's tenure with the Mets, by the way, lasted all of 9 1/3 innings over six games during the 1995 season.  The next year, with Atlanta, he saw time in six more games and then disappeared from the bigs forever.  The moral of the story?  You could pretty much throw your cap on the field and find yourself on a piece of cardboard during the prolific 1990's baseball card landscape. 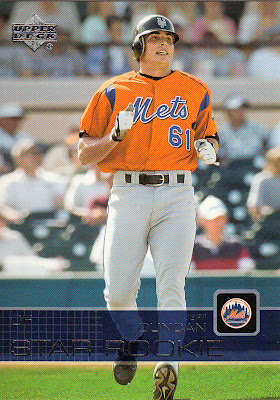 Jeff Duncan, Star Rookie from 2003.  There was a time when Duncan figured to play into the future outfield plans in Flushing.  But a .182 average over the course of two major league stints pretty much knocked that notion off the table.  My wiki-research tells me that Duncan, formerly an assistant at Purdue University, will be the head coach of Kent State baseball in 2014.

And the final piece to show off is a real dandy. 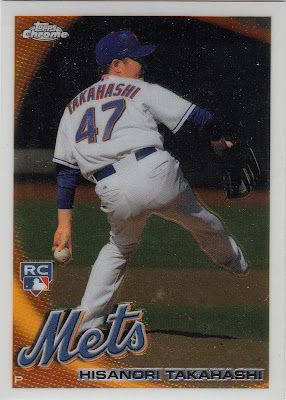 I've always been fascinated by Japanese players coming into the majors.  And the Mets have had their fair share over the past 15 years or so.  Some have been successful, but most have been, well, duds.  Takahashi, though, would have to be considered a success in his one year with New York,  Hisanori -- one of two Takahashis to play for the Mets in their history -- won 10 games and posted a 3.61 ERA as a long man and spot-starter for the 2010 club.  This Chrome card represents one of the few Takahashi-as-a-Met cards that were produced.  He was featured in the Bowman set that year, but not the regular Topps or Topps Update set.

Thanks for your contribution to the All-Time Mets Project, Douglas.  These are all awesome grabs!