Angel in the Envelope 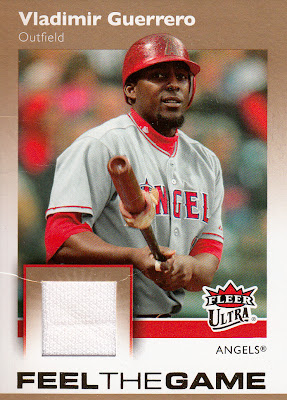 For his prolific 16-year career, Vladimir Guerrero collected 2,590 base hits, smacked 449 home runs, and drove in a whopping 1,496 runs.  He made nine All-Star squads, won eight Silver Slugger awards and, in 2004, was named the A.L.'s Most Valuable Player.  Career batting average?  How about .318?!

There wasn't much on a ball field that Guerrero couldn't do.  At the plate, in the field, or on the bases, Vlad was someone for whom you had to gameplan.  He was the essence of a five-tool player.  And his ticket to Cooperstown is all but assured.

A big 'thank you' to Bert of Swing and a Pop-Up for recently floating me this 2007 Fleer Ultra jersey card of the great Vlad.  And, thus allowing me to wax a little about one of the game's all-time greats.

As far as PWEs are concerned, they don't get much better than this.