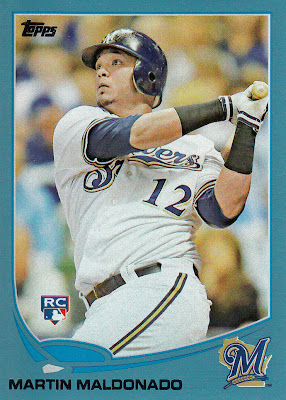 Today is my *gulp* 33rd birthday.  Man, I coulda sworn I just turned 15 a few years ago.  Anyhow, time stands still for nobody, so I might as well accept my advancing years with a grin (and a beer).

Anyhow, I'm gonna use this post to catch up on a couple of pieces of baseball card-related mail that found its way into the Kaz mailbox over the weekend.

Firstly, Marcus de Backstop was at it again with his PWEs.  I've been the lucky recipient of a few of these recently.  This time around, a trio of Series 2 Wal-Mart blues.  I've been asked on a couple occasions whether or not I'd be chasing the blue parallels as I did in Series 1.  My stock answer on prior inquiries has been 'No' since I'm still dragging my arse on S1, some 88 cards shy of a finished project.

But, if I'm being honest, getting the above card of Mr. Maldonado and his two friends made me somewhat wistful about the whole idea of attacking S2.  Perhaps I should reconsider my stance on the matter?  After all,  I was able to amass 242 of the 330 Series 1 cards in, what, four months?  That's not so awful, I guess.  It's not like I'm barely half-way done; I feel confident I'll reach my goal eventually.  And, really, if I go after S2 also and fall short, so what?  Does that mean I'm gonna hate myself for being a little ambitious?  There are far greater things in life worthy of self-loathing, such as bad hair days, extra helpings of dinner and a brown lawn.

So, my official stance on Series 2 Blues?  Eh, still undecided, but leaning more towards 'Yes' than I was a week ago.

Oh, and another fun item from the most recent Marcus PWE: 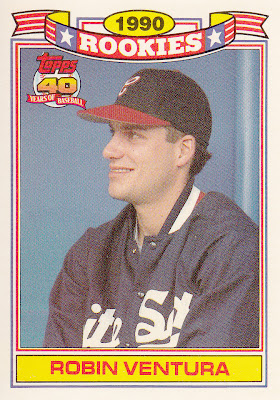 I know these Glossy Rookies and All-Stars from the '91 set in particular have been popping up like weeds in repacks from coast to coast, but I'm not among those complaining.  I've always loved these 'inserts' and I doubt the novelty will ware off any time soon.  Especially when it's a player I collect, like Rockin' Robin.

As always, a tip of the cap to my good buddy Marcus.  Thank you, friend!

I haven't been so preoccupied with eBay shopping in recent weeks, but I did happen to make on purchase about a week and a half ago. 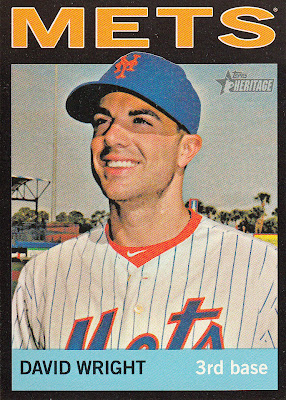 At just 99-cents each plus reasonable shipipng, I grabbed a trio of Heritage black-bordered parallels.  Of course, I had to have the Captian, David Wright. 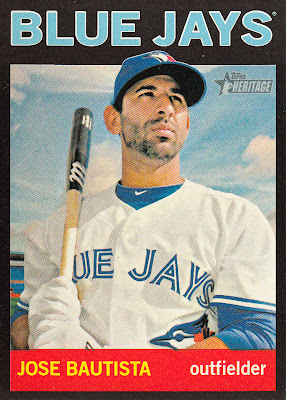 Joey Bats was a no-brainer for me, also.  He's really picked up after a slow start to the season, eh?  And might I add, I am so glad the Jays reverted back to the classic-looking uniforms.  So fresh and so clean! 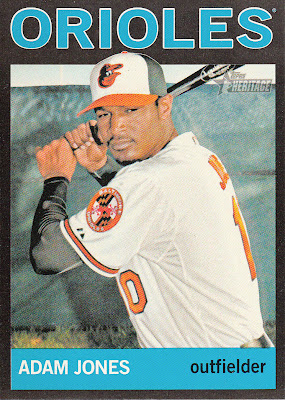 And last but not least, the man who might just be your starting American League centerfielder in the upcoming All-Star Game, Adam Jones.  He's overshadowed -- and understandably so! -- by teammate Chris Davis, but Jones is quietly putting up another fantastic season.

But, hey, cut me some slack, I can barely stay up beyond 10 o'clock these days.  Lemme just enjoy my baseball cards, darnit!