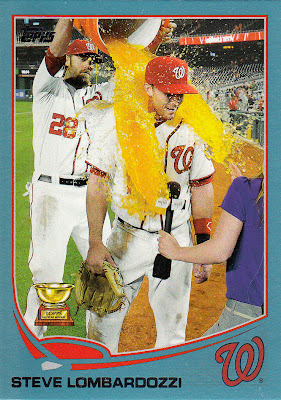 Does anyone remember those loony Sunkist television ads from the '90s?  The ones where the tanned-and-toned surfer dude runs back onto the beach after catching a gnarly wave, grabs a 2-liter bottle of 'Kist and chugs it like his survival depends on it?  This card kinda reminds me of those carefree days in the sun that never were.

Certainly, as I've stated before, this is one of the best cards Topps has produced this year.

Oh, by the way, this card comes to us courtesy of the gentle and generous Marcus of All the Way to the Backstop.  It -- and a few others from 2013 Series 2 Wal-Mart checklist -- came my way via PWE over the weekend.

Accompanying that envelope was a twin envelope, also from Marcus, containing a few more odds and ends. 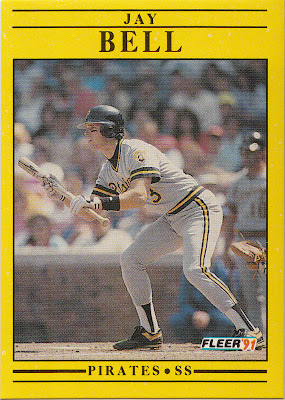 I know you were anxious to find out when the Mellow Yellow would come into play.  Well... I hope you're satisfied.  I most assuredly was happy to lay eyes upon this card, undoubtedly a duplicate castoff from Marcus' 1991 Fleer universe, which you can now experience in living color via his terrific new blog.

This card features a most appropriate stance for Jay Bell, who batted second the majority of the time in those mighty days of Pittsburgh baseball, when Bonds, Bonilla and Van Slyke roamed the confluence.  Bell, at the discretion of skipper Jim Leyland, was routinely asked to bunt runners into scoring position ahead of those All-Star sluggers.  It proved to be a pretty successful team formula, though Bell was capable of so much more, as he later proved.  That's what you call a real 'team player' though.

Also in the mix in this second envelope: 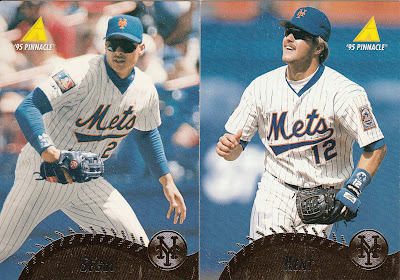 These days especially, I'm oh-so-anxious to receive any and all Mets cards, as I'm in full swing with my All-Time Mets project.  I spent a lot of time over the weekend pouring through my Mets boxes, carefully selecting just one card for each player that will represent that fella in the All-Time Mets Binder at some point in the future.  Completely nerdy, yes, but I haven't had so much fun with my collection in years.

Both of these cards, from '95 Pinnacle, are fine candidates for the David Segui and Jeff Kent representatives. Nice, bright home white uniforms; commemorative patches visible on the respective sleeves; and of course trendy eyewear to mute the sunny afternoon.  Each card will have some stiff competition to make the elite but, but both have the right stuff, so to speak. 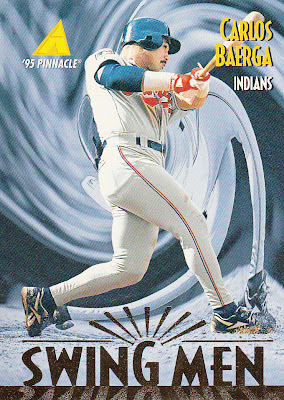 Last but never least, a new piece for my Carlos Baerga collection.  It appears that Carlos has managed to bend time and space with a powerful swing of the bat.  Maybe this has something to do with his pronounced downturn in success beginning with the '96 season.  Hmm.

Anyhow, thumbs up on the special deliveries, Marcus!  Keep up the fine work with your bloggin' double duty...